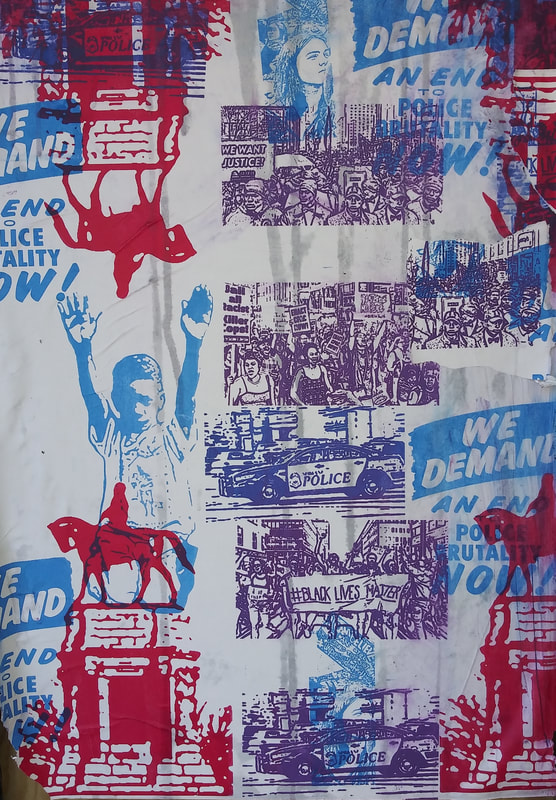 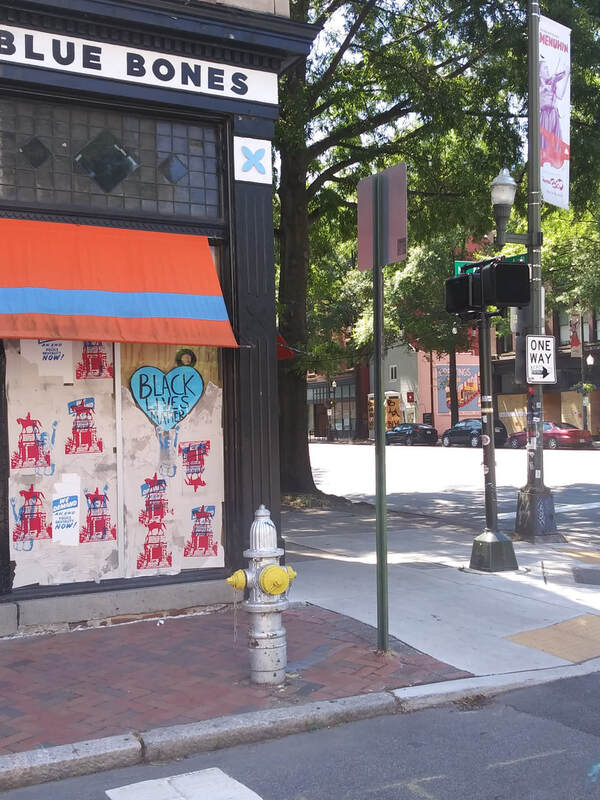 ​The Night Lights series, which began in January of 2020, as a series of fine art monotype prints. This work was intended to raise awareness of nationwide police brutality, racial injustice, and the presence of Confederate monuments in the South where I lived. I used Red and Blue to reference strobing police lights. The red, white, and blue also represent the American flag. The imagery for this series was pulled directly from the internet and personal photographs. By using photo’s I wanted to provoke emotion and solidarity. The icons created for this series were:
● “Black Lives Matter” Political Marchers/ Solidarity
● Confederate Monuments / the Robert E Lee statue
● Vintage Civil Rights Posters/ A History of Racism
● Police cars /Systematic Racism
● Halftone Circles/ Targets /Racial Profiling
● NFL Football Player who “took a knee” during the National Anthem
● Child Protester in “Hands Up Don't Shoot” pose/ Police Brutality/ Plea for Empathy/ Surrender

By pairing these loaded images together I created narrative connections and parallels in American history. Each icon was screen printed in repetitious and overlapping compositions. Hand-written poems and promises of solidarity are scribed within the margins.

After the murder of George Flyod on May 25, 2020, downtown Richmond saw firsthand the pain and suffering of the black community. Confederate monuments became targets for graffiti and paintballs. People peacefully gathered at the base of the monuments in solidarity against racial volience. Businesses boarded up their windows and posted Black Lives Matter signs in support of the protests. I retreated to my studio to mass-produce the Night Lights imagery. I contacted local businesses who allowed me plaster my images on their boarded-up windows. Protesters marched the streets at night. Police were everywhere. Each morning, I went out at dawn plastering my images on windows. People waiting for buses watched me work. Some asked questions, some shared stories about police brutality and civil rights protests of the 1950’s-1960’s.
In the year that followed, numerous confederate monuments across the south were removed. A year after the George Flyyod protest, the Robert E Lee statue was finally removed from Richmond's historical monument boulevard.
see Community Projects 2020 for more street art images